The Region of Tuscia 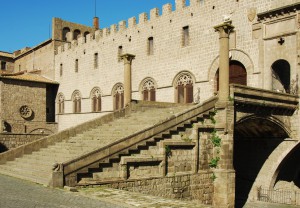 The region known as Tuscia was so named by the ancient Romans after its inhabitants, the Etruscnas. It includes the city of Viterbo and stretches out over Latium, in the territory North of Rome, and borders Tuscany, Umbria and the shores of the Mediterranean Sea.

Its natural surroundings are incomparably beautiful and there are archeological and artistic sites of great importance. Don’t miss the Etruscan necropolises to be found in the region.

The city of Viterbo, administrative center of the region, is a beautiful and pleasant city. It is enclosed by sturdy town walls with towers and gates. It has many captivating churches, palaces, elegant fountains and a strikingly well-preserved medieval district called San Pellegrino with pepper stone buildings, dark and narrow allies and archways.

There are several splendid Romanesque churches in Tuscia, the churches of Santa Maria and San Pietro in Tuscania and the Church of San Flaviano in Montefiascone, just to mention the most renowned. 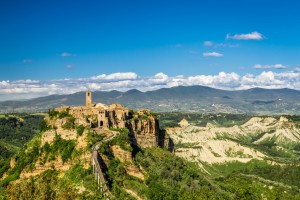 You will also find many Renaissance palazzi and gardens: the Farnese Palace in Caprarola, Villa Lante in Bagnaia and the Sacred Grove in Bomarzo.

You can admire the enchanting woodland of the Vulsinii Mountains, the beech-wood of the Cimini Mountains, the cornfields of the Maremma spotted with red poppies and the gullies of the lunar landscape of the Valle dei Calanchi and the volcanic lakes of Vico and Bolsena.

Geologically born out of the once active vulcanoes of this area, the region has many springs of thermal waters, some freely accessible and scattered in the countryside, others in organized spas such as the Terme dei Papi of Viterbo.

To learn more about historical and artistic attractions to see consult the website www.alexbompard.com/places.