Capalbio and the Tarot Garden 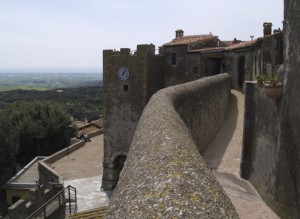 The charming medieval hilltop town of Capalbio in Tuscany has two concentric rings of crenellated walls with well-preserved walks along the battlements and beautiful views of the town’s natural surroundings. On the main square, Piazzetta Magenta, is the Church of San Nicola decorated with 15th Century frescoes of the Umbrian and the Sienese schools and the remains of the Aldobrandeschi Fortress now part of the Palazzo Collacchioni. On the firstr fllor is the 18th century forte-piano played by composer Giacomo Puccini, a frequent visitor of the Collacchioni family who was fond of bird shooting on the sandy beaches of Capalbio.

The natural surroundings are exquisite. Close to the sea is the lagoon of Lake Burano, a WWF protected area, with the massive 17th Century watch tower of Buranaccio rising from its sand dunes. The beaches and clear waters of Capalbio stretch for over 12 kilometres.
Nearby, in the hamlet of Garavicchio , is the Tarot Garden, an internationally renowned sculpture garden created by the French American artist Niki de Saint Phälle with help from Swiss sculptor Jean Tinguely, her companion. The garden is an esoteric walk through the typical Mediterranean bush of Maremma marked by imposing, often surprising and colourful sculptures that represent the Major Arcanes of the Tarot Cards.

Capalbio can be reached from Capodimonte by car in just 50 minutes.