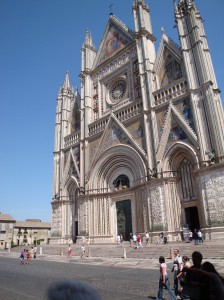 The city of Orvieto in Umbria is only an hour‘s drive from Capodimonte.   A city rich in monuments and museums where there is also an extremely interesting Etruscan burial ground, the necropolis of Crocifisso del Tufo.
Its Cathedral is one of the highest expressions of late Medieval Italian art and its construction is connected to the miracle of the host that took place in the nearby town of Bolsena in 1263. The bright pinnacled façade is a rare collection of sculptures and mosaics of graceful beauty and the work of the Sienese architect Lorenzo Maitani.
Inside are the Chapel of the Corporal, where the holy cloth which is considered evidence of the eucharistic miracle of Bolsena is preserved, and the Chapel of San Brizio, built at the start of the 15th century. Its frescoes are one of the most significant chapters of Italian Renaissance painting. They were begun by Beato Angelico with the help of Benozzo Gozzoli and Pietro di Nicola Baroni and were completet, at the end of the 15th century, by Luca Signorelli. 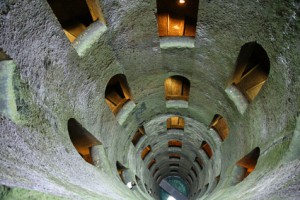 Another interesting and unusual piece of architecture is the Pozzo di San Patrizio. This is a well designed in the 16th century by Antonio da Sangallo the Younger to guarantee water supplies to the city in case of siege. It is a masterpiece of engineering: it plunges 53 meters deep into the ground and consists of two independent spiral stairways, threaded one into the other, with separate entrances thus to allow mules transporting water to go down and up at the same time.