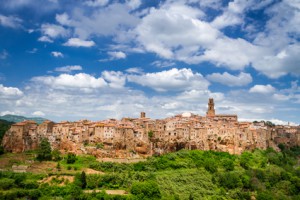 The Tuscan towns of Pitigliano, Sorano and Sovana can be reached by car from Capodimonte in just 30 minutes. They stretch along the lower slopes of the Vulsinii Mountains in Maremma. All three are perched on spurs of tufa stone overlooking deep valleys below.
Pitigliano is known as “The Little Jerusalem” . This is because from mid-16th century a numerous community of Jews, mostly fleeing from the city of Rome and papal oppression, decided to settle down there. Today one can visit the old Jewish Ghetto and its Sinagogue.
The houses of Sorano rise vertically clinging to a cliff of tufa. A maze of narrow streets where one can pleasantly walk around among the many craftsmen shops. Don’t miss the Orsini Fortress and the Masso Leopoldino rampart which offers a breathtaking view of the town. 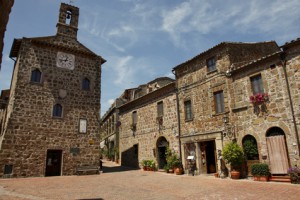 Time in Sovana seems to have stood still: the medieval layout of the town has reached our days unchanged. The town boasts a beautiful Romanesque cathedral and a very interesting Etruscan necropolis where the Ildebranda tomb is situated: an outstanding funerary monument totally excavated in the rock and designed to look like a Greek temple.

The wines produced in this area are almost invariably extraordinarily good.